Heidi Cecilie Baastad Christensen joined the Norwegian National Ballet in 2020, after two years with the NNB 2. She has danced in Balanchine's Symphony in C and Serenade, Makarova's La Bayadère, The Nutcracker and Swan Lake. In the spring 2019 she danced Dido in Heise' Dido og Aeneas, and in 2020 she danced Bordeaux Girl in Kylián's Sleepless, soloist couple in Andersen's Holbergsuite and made her debut in Fokine's famous solo The Dying Swan. She has also danced in Ekman's Resin and Cacti and in Boyadjiev's new piece Fair Enough.

Christensen (born in 1999) has danced the child’s role of little Clara in Bjørn’s The Nutcracker and, during her studies, also danced the role of the Arabian girl and a snowflake in Boyadjiev’s The Nutcracker, both with the Norwegian National Ballet. In 2018, Christensen came in third in the Stora Daldansen Nordic Baltic Ballet Competition in Falun and was among the top 12 in the senior age division for girls in the Youth America Grand Prix (YAGP). She began dancing at the age of four, continued dancing at the Norwegian National Ballet School and graduated from the Oslo National Academy of the Arts in the spring of 2018. 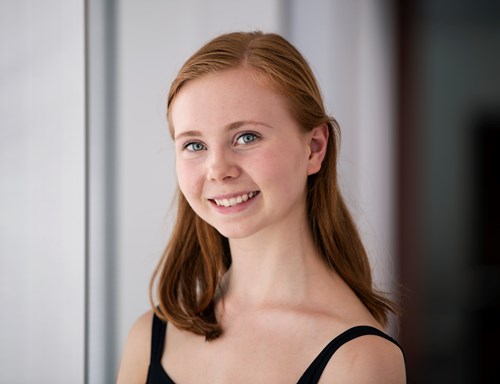