Helena Byrt joined the Norwegian National Ballet in 2021, after three years with the NNB 2. In 2021, she made her debut in the title role in an extract from La Sylphide, a year after dancing prominent parts in Kylián's Sleepless and Andersen's Holberg Suite. She has danced in Makarova's La Bayadère, Swan Lake (e.g. Waltz and Czardas), Balanchine's Serenade, Symphony in C and Valse-Fantaisie, Ekman's Resin, Heise's Dido and Aeneas, Boyadjiev's The Nutcracker and Edmonds' Left from Write.

Byrt (born in 1999) began dancing at the age of four and spent eight years at the Norwegian National Ballet School before graduating from the Oslo National Academy of the Arts in 2018. As a student, she danced the role of little Clara in Bjørn’s The Nutcracker (2011) and Arabian girl and Snowflake in Boyadjiev’s The Nutcracker (2016 and 2017).

In 2017, she came in second in the senior division of the Nordic Baltic Ballet Competition and, that same year, won the gold medal and jury’s award in the Concours International de Danse Classique de Grasse in France. In 2018, she was a semifinalist in the Prix de Lausanne competition in Switzerland. 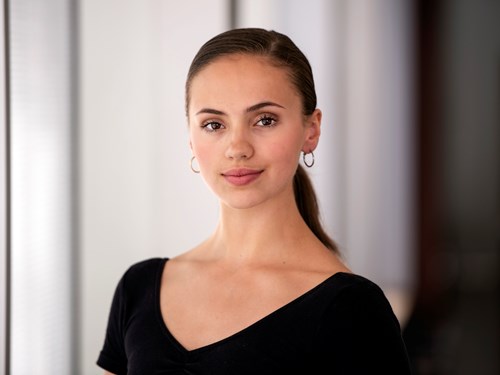