Symphony No 8
by Mahler 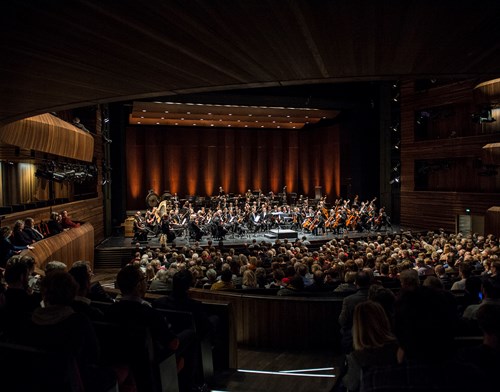 During the premiere performance in 1910, there were more than 1,000 performers on stage. Audiences can now experience the ‘Symphony of the Thousand’ when the Oslo Philharmonic joins forces with the Norwegian National Opera Orchestra, a dream team of soloists and a gigantic choir. The conductor is Finnish Mikko Franck.

The original premiere of Symphony No. 8 in Munich in 1910 was a major event in music history. The theatre was filled with renowned composers, conductors, writers and others, who watched a performance with 850 choir singers, 170 orchestra musicians, eight solo singers and Mahler himself as conductor. Mahler was not accustomed to such a positive response to his new symphonies, but this concert was an unprecedented victory. The applause was said to last for 20 minutes after the final grand E-flat major chord sounded through the Festsalen in Munich. Incidentally, it was the very last concert in which Mahler conducted his own music, dying of an infectious disease eight months later.

100 years of the Oslo Philharmonic

In 2019, the Oslo Philharmonic is celebrating its 100th anniversary and this concert is part of the anniversary programme. Mahler’s music was important to the Oslo Philharmonic during the orchestra’s very first season in 1919, when Symphony No. 1 was performed for the first time in Norway. Only a few years later, central players in the Oslo’s music world began dreaming about putting on a performance of Mahler’s gigantic Symphony No. 8. Yet it would take 60 years before this dream became a reality: On 22 February 1979, an Oslo audience could finally experience the ‘Symphony of the Thousand’, when all of the Oslo academic choir, Silver Boys Choir, Oslo Philharmonic Choir, eight solo singers, Norwegian Radio Orchestra, Oslo Philharmonic and conductor Okko Kamu packed the Oslo Concert Hall. Both the audience and critics referred to it as a completely overwhelming experience. This work is now being performed once more together with the Norwegian National Opera Orchestra – the first time these two orchestras share the same stage.