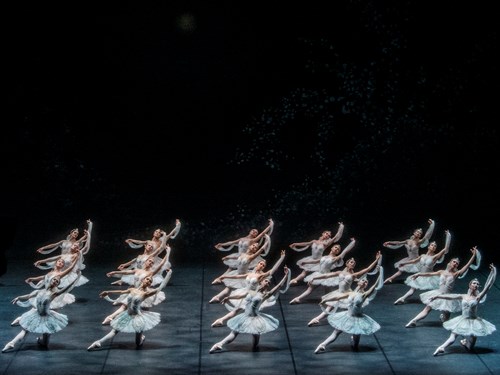 This Russian classic has been delighting audiences for close to 150 years. Now it is returning to the Main Stage.

Ever since its first premiere in St. Petersburg in 1877, this ballet about the temple dancer (bayadère) Nikiya has captivated audiences. So did the Norwegian National Ballet in 2019, when the press described their version of La Bayadère as “a masterpiece” – and “hypnotic in its precision”.

The version that is returning to the Main Stage was created for the American Ballet Theatre by the legendary Russian dancer Natalia Makarova, whose ballet is based on Marius Petipa’s original choreography.

(…) The Norwegian company's female corps de ballet was absolutely breathtaking in the all-important "Kingdom of the Shades" scene...

A rare opportunity to see the classic that  became controversial

There are several reasons why La Bayadère has become the legendary classic it is: the strikingly beautiful ensemble scenes, the virtuous solos, the grand emotions, and the deeply human theme – all placed in an exotic fairy tale world.

The piece also contains numerous aspects that may be difficult for today’s audiences to identify with. For this reason, ballet houses around the world are currently engaging in dialogue about whether this and other classics still deserves a rightful place in the repertoire. With its exotic elements and opium dreams, it gives us an escapist tableau from another world – like the operas and ballets of the 1800s often offered audiences an escape from reality and everyday life; a journey to a magical place.

This spring, La Bayadère is part of the National Ballet's series The Others, which through performances, conversations and debates raises questions about the role of ballet and art in society in general.

In an Oriental-inspired setting, Nikiya and Princess Gamzatti fight over the warrior prince Solor, putting their heart into brilliant dance. La Bayadère includes The Kingdom of the Shades – the iconic dream scene with 28 female dancers together on stage.

The Norwegian performing art scene has become even richer. As an audience, you cannot be anything other than captivated by this masterpiece.

Natalia Makarova’s version of La Bayadère descends from the original production from 1877. The ballet was often performed in the former Soviet Union and was part of the Russian repertoire with which Makarova grew up. In the West, La Bayadère was not performed until 1961, when the Kirov Ballet toured with The Kingdom of the Shades.

La Bayadère is a production from the Royal Opera House, Covent Garden, in London.

Classical ballet at its very best. (...) The quality of this production is extremely high in every aspect.

A cornucopia of glitter, brocade, virtuosity and symmetrical aesthetics, skilfully presented by a company on its way up. A magical, classic experience.

La Bayadère is part of the Norwegian National Ballet's series The Others.

Common to the works, which have been created over a period of 150 years, is an almost uninhibited look at the others, another place and another time. What does this look say about us? And how should we as society relate to the classical cultural heritage, with the attitudes and stereotypes of the past? We will contribute by showing the range within performing arts, with performances, panel debates and discussion, from old fairy tale ballets to travelogues from the early 20th century. With the series The Others, we want to illuminate, contribute to a space of expression and invite debate .