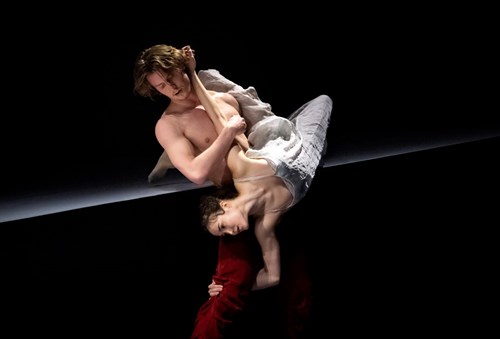 Four up-and-coming choreographers have been invited to create three works for the Norwegian National Ballet with music by Ravel, Debussy and Chopin.

A Boléro by Samantha Lynch and Afternoon of a Faun by Whitney Jensen and Anaïs Touret can now finally be performed in front of a live audience. “Youthful and fresh, minimalistic and theatrical, and a bit like life itself,” Inger Marie Kjølstadmyr wrote in Dagsavisen following the stream premiere last year. The two ballets are joined by a brand-new work by Brazilian Juliano Nunes, a rising star in the international dance world. In the orchestra pit, the National Opera Orchestra will be performing music by some of the world’s greatest composers.

Fourteen dancers are in the performance, dancing to Peter Baden’s electronic soundscape based on Claude Debussy’s Prelude to the Afternoon of a Faun, a piece that is considered the beginning of modern music.

Samantha Lynch’s A Boléro is choreographed to Ravel’s famous Boléro from 1928, in which the same melody is repeated over and over again – with growing intensity and an explosive climax, and with the two dancers in constant flux.

Lynch has been listening to Boléro since childhood and wanted to toy with the undertones and rhythmics in the music.

Hotshot in the ballet world

Juliano Nunes has created Canvas to Chopin’s Piano Concerto No. 1. Nunes has distinguished himself with his innovative approach to translating the language of ballet into something modern and era-appropriate. He explores movement with sensitivity – and when the entire company takes the stage, this choreography will be unlike anything you have ever seen before.

With The Norwegian National Ballet, The Opera Orchestra

AFTERNOON OF A FAUN

Although the pandemic closed our doors, it opened up other spaces. Whitney Jensen, Anaïs Touret and Samantha Lynch all dance with the Norwegian National Ballet and are part of the the company’s choreography initiative. During the pandemic, they debuted as choreographers on the Main Stage with Afternoon of a Faun and A Boléro.

Samantha Lynch previously created C aura for Chamber Dance and the duet for: jake, which she performed and created together with Douwe Dekkers. Before A Boléro returns to the Main Stage at the Oslo Opera House, Lunch has been invited to create a new choreography for the Zurich Ballet’s junior company. Lynch is a principal dancer with the Norwegian National Ballet and has also been the head of the NNB RAW since taking the initiative to create the choreography workshop in 2018.

Anaïs Touret has been called a rising star in the international magazine Dance Europe and has been invited by both the Royal Opera House and German OsterTanz Festival with her work Let's Play. In Norway, the Norwegian Broadcasting Corporation (NRK) described her as “an exciting choreographer” after the premiere of Wagō.

Touret and Whitney Jensen choreographed Afternoon of a Faun as a team. Jensen has forged an impressive career as a dancer, first as a soloist with the Boston Ballet and currently as a soloist with the Norwegian National Ballet, and has danced leading roles in Swan Lake, La Bayadère and Onegin, to name only a few. As a choreographer, Jensen created the To Fly duet for Chamber Dance on the Second Stage.